Tearful former residents of Horatia House described their emotions at watching a crane lift the first panel from the condemned Somerstown tower block.

“I wasn’t going to get all emotional but I can’t help it,” said Tara Keenan, who lived for nine years in the 1960s Meriden Road building.

Watch a two-minute video of the residents talking about their reaction to the important moment in the redevelopment of the area, above.

Tara had to be rehoused, along with more than 250 other households, living in Horatia and next door Leamington House, so that Portsmouth City Council could carefully, and safely, bring the blocks down piece-by-piece, after it was discovered that there were problems with the concrete structures.

A community panel of local residents, charities, schools, businesses and other organisations is working with the council, alongside a team of affordable housing design specialists, to put together plans for new homes, green space and play space to improve the site, and the wider area, for the people who live there.

“There was a great community in this building so I hope that the council replaces that community bit in the new development,” Tara added.

Cllr Darren Sanders said: “This is really quite emotional for me – my mum lived in this block for 13 years.”

Elaine Tupper and her daughter Natasha also lived in Horatia House for 13 years, moving in when Natasha was two-years-old.

Elaine said: “We hope to see more affordable housing for council tenants – private tenants as well. We want to see more green space; more play spaces – especially for the children who live in the local area.”

Natasha, 17, said: “Seeing this area being reconstructed is quite a nice thing to see. I just hope it brings more people to Portsmouth because it’s a nice area – you just don’t get to see very much of it.”

Be part of this exciting opportunity to improve Somerstown

The project to carefully, and safely, bring down the blocks is progressing well and is due to be completed in the second half of next year.

The council and the Horatia and Leamington Houses Community Panel have said that they will create a high quality, sustainable, mixed-use urban neighbourhood.

The community panel – which is at the centre of both the deconstruction and redevelopment projects – has been meeting every month since March 2021. If you would like to join the community panel; call Tim Raw on 07901 100537 or email tim.raw@portsmouthcc.gov.uk

The council has hosted lighting workshops, public open drop-in sessions, play and plant events and community art projects in the area surrounding the blocks, over the last year, to find out how people want the site improved.

Artwork by local artists, schools and youth groups surround the boundary of the site as part of Somerstown Street Gallery – which also includes nearly 650 self-portraits by local people – as well as The Forest of Somerstown, a community mural made up of the handprints of local children and adults.

To be involved with the Somerstown Street Gallery email molly.penney@portsmouthcc.gov.uk

Go to www.horatialeamington.portsmouth.gov.uk to find out more about the project.

On the website you can watch project videos and find every document relating to the deconstruction of the blocks and the redevelopment of the area. 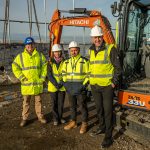 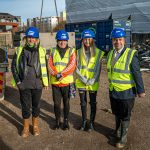