Portsmouth City Council has installed innovative solar panel, battery and electric vehicle (EV) charging systems at two housing depots in the city. Five new electric vehicles have been leased, to be used by the council’s green and clean team, which will run on the green power produced by the solar.

The new solar, battery and electric vehicle technology is the latest council project completed that will help to reduce carbon emissions and improve air quality across the city. Portsmouth City Council has one of the largest solar and battery portfolios of any UK local authority; which means that there is potential for future EV infrastructure to be developed to take advantage of the green electricity produced.

The solar panel and battery systems have been installed at the Housing Depot in Port Royal Street and at Paulsgrove Housing Office. The Green and Clean vans are parked up and charged overnight, so that they can carry out their duties of cleaning and improving the council’s housing estates during the day. The systems have optimisers, Solar Edge, to optimise the installed solar panels and bypasses shaded, poorly performing panels to ensure the system is operating to its optimum level.  Each individual panel can be monitored by the council’s energy services team using the Solar Edge monitoring platform, in case one should break or under perform. 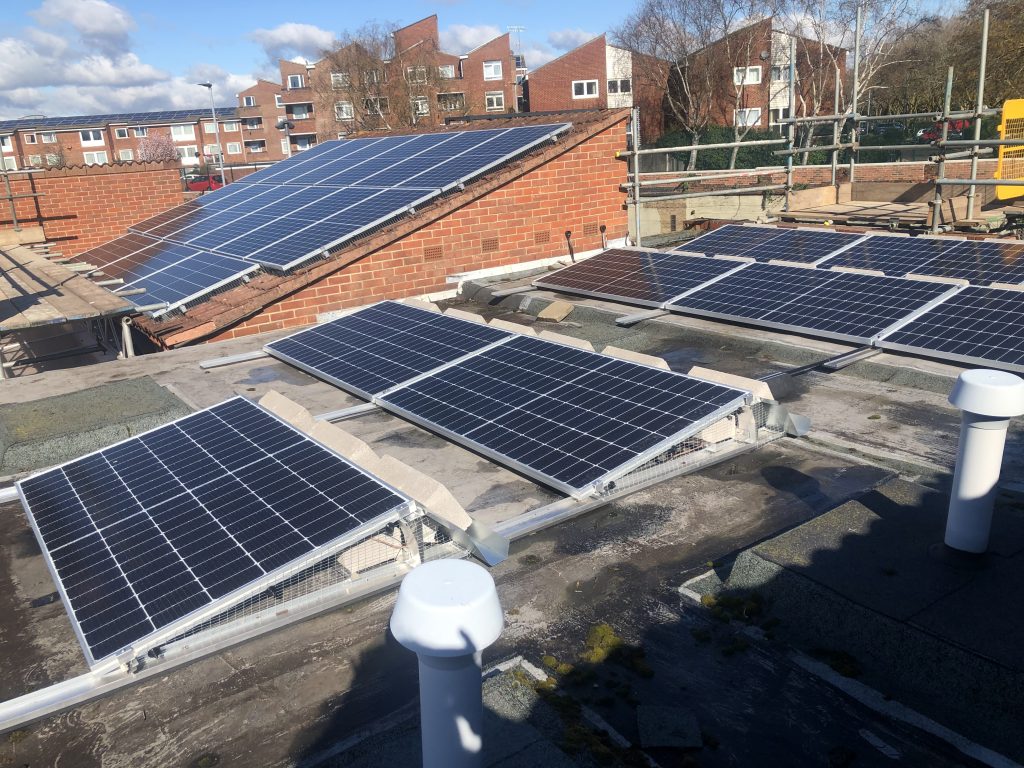 Tesla Powerwall batteries are also installed at the sites, which capture excess solar for use in the buildings. Additionally, the batteries charge at night during periods of low-cost, off-peak electricity tariffs; and discharge during the more costly peak periods, saving the council money from their energy bills.

Since installation, 95% of the housing depot’s electricity needs have been supplied by the solar PV and battery system; with 63% supplied at Paulsgrove Housing Office.

Cabinet Member for Housing and Preventing Homelessness, Darren Sanders spoke about the project: “This shows the Council’s continued commitment to tackling the climate emergency and making our air less dirty. As we emerge into the new different, we want a kinder, fairer and greener Portsmouth. This is another step towards that.”

To date the Paulsgrove Housing Office and Port Royal Street systems have generated over 15 Mega-Watt hours (MWh) between them.

The five new electric vehicles will now be charged by using energy produced by the solar panels at the Housing Depot and Paulsgrove Housing Office; to ensure the lowest possible emissions.

It is estimated that the solar system could power the vehicles for approximately 60,000 miles a year using zero emission, locally generated renewable energy. This would save approximately £12,000 of fuel per year.

For the green and clean team aim it is just the start and they aim to use more electric vehicles; and have recently changed their gardening equipment to all electric from diesel. The team are trying to improve the natural environment in Portsmouth too; growing native shrubs, encouraging pollinators and allowing previously mowed lawns to revert to meadowland.

Cabinet Member for Climate Change and the Green Recovery, Kimberly Barrett spoke about the new electric vehicles: “There is quite rightly a growing demand for the council to use more electric vehicles, as a way to tackle emissions and our carbon footprint. I’m proud to see that we are meeting this demand.

The new green & clean vehicles not only cut our vehicle emissions but make use of energy generated by our own solar panel systems. In addition, the team’s new electric gardening equipment shows we are exploring every avenue in order to save carbon wherever we can.”

The systems will reduce carbon emissions by 9.3 tonnes of CO2e in the first year.  Coupled with the electric vehicles this will help the Council reduce pollution in the city and meet clean air zone targets, as well as contributing to the council’s aim to achieving a net zero carbon Portsmouth by 2030.

This website uses cookies to improve your experience while you navigate through the website. Out of these cookies, the cookies that are categorized as necessary are stored on your browser as they are essential for the working of basic functionalities of the website. We also use third-party cookies that help us analyze and understand how you use this website. These cookies will be stored in your browser only with your consent. You also have the option to opt-out of these cookies. But opting out of some of these cookies may have an effect on your browsing experience.
Necessary Always Enabled
Necessary cookies are absolutely essential for the website to function properly. This category only includes cookies that ensures basic functionalities and security features of the website. These cookies do not store any personal information.
Functional
Functional cookies help to perform certain functionalities like sharing the content of the website on social media platforms, collect feedbacks, and other third-party features.
Performance
Performance cookies are used to understand and analyze the key performance indexes of the website which helps in delivering a better user experience for the visitors.
Analytics
Analytical cookies are used to understand how visitors interact with the website. These cookies help provide information on metrics the number of visitors, bounce rate, traffic source, etc.
Advertisement
Advertisement cookies are used to provide visitors with relevant ads and marketing campaigns. These cookies track visitors across websites and collect information to provide customized ads.
Others
Other uncategorized cookies are those that are being analyzed and have not been classified into a category as yet.
SAVE & ACCEPT